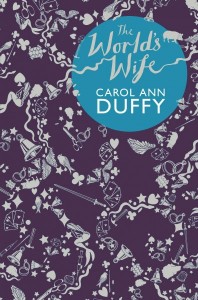 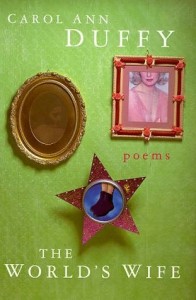 The first thing which struck me about The World’s Wife was how much fun it was to read and how it didn’t feel like a criticism against men or an attack on male society. That  isn’t the way to think about these poems. I approached the collection with the understanding that it was a female reinvention of the history books, and the expectation that the female figures would be strong and wise and even with the slight trepidation that I might find them too unapproachable, but it wasn’t like that at all.

‘The World’s Wife’ is a very tongue in cheek representation of powerful women in all their greatness and their flaws. Duffy draws on the wells of history and mythology, giving each story a new spin and a modern touch, with a slither of fairytale magic to balance them out. These aren’t the fairy-tales of your childhood, but a darker, more macabre kind, very reminiscent of the Brothers Grimm – if they were female.

This ‘wake-up call’ is leading up to a discussion post on Saturday where you’ll all get the chance to say what you liked about the collection and how it made you feel, or even what you didn’t like so much. Here are a few questions you may wish to consider as you read the collection and they will act as a brief guide for my own analysis:

1. What impact does the balance of historical and mythological figures have on the collection? Do you feel this reflects the balance between the seriousness and frivolity of Duffy’s critique on the role of women in society?

2. Consider how Duffy uses rhyme and rhythm/ the element of sound in the poems, in particular, Mrs Sisyphus. How effective is this in engaging the reader and what other purpose does it serve?

3. Which are your favourite poems in the collection?

If you’re short on time and not planning on reading the whole collection, the ones I’d really recommend you to take a look at are: Queen Herod, Mrs Midas, Mrs Sisyphus, Mrs Lazarus, Mrs Icarus and Eurydice.

Please be aware that many of these poems allude to adult themes of sex and violence and may not be appropriate for younger readers. I have tried to identify below which are suitable for each audience and have provided a link to each poem so you can read along.

Poems for 15+ or parental guidance: