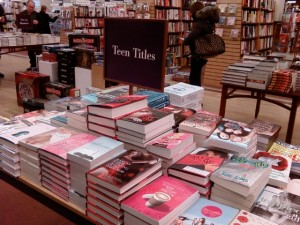 Does the world need a content rating system for young adult books?

In April, when we released the latest list of books that people want banned from school libraries, a reader suggested that there should be a book rating system, similar to the rating systems for TV and movies, to let parents know whether a young adult or adult book is appropriate for their child.

“There is a rating system for movies, and I think adding one for books would be a good idea,” commenter JN said. “My 13 yr old niece is on a reading spree of 2-3 books a week. Her parents don’t have time to read that much and the descriptions frequently do not have enough info to be a good basis of for judgement.”

Fans of magical prose and magical worlds, take heart. Titan Books has recently released a special limited edition version of steampunk legend James Blaylock’s The Aylesford Skull, a classic from one of the genre’s trailblazers. To celebrate the release, Blaylock has put together a list of forgotten or ignored works of literature that have inspired his own writing, and should be must-reads for anyone interested in science fiction or the fantastic.

E-books are helping fuel overall growth in the publishing industry. According to BookStats figures released Wednesday by the Association of American Publishers (AAP) and the Book Industry Study Group (BISG), trade books generated $15 billion in revenue in 2012, up 6.9% from the year before. Trade publications include fiction and non-fiction books for adults, young adults and children, and do not include higher ed, K-12 and professional/scholarly volumes.

So . . . in 2003, JC and I launched a series staring a female vampire hunter—in a dark medieval fantasy setting—and the Noble Dead Saga was born.  I’m the first drafter in our team, and I was having a blast.  I “get” why readers enjoy stories about vampires and about vampire hunters, and I think as a result, the series did well.