Reading Between the Lines: Visual Poetry Visual poetry is a unique and mysterious creature, taking all manner of forms – in fact any form may conceivably become a poem, with the right adaptation. Above we see “Silencio” by Eugen Gomringer, which expressly comments on the existence of space and language as symbiotic beings. The silence in this poem is not in the words but in the spaces between them, and so we realise immediately that in visual poetry we are being asked to read beyond language and develop an understanding of form, of space.

Thus we are asked to read between the lines in visual poetry, to consider not only what we are given in language but also the form and structure of the presented text. This goes far beyond the usual line break question and instead pressures the reader to make a cognitive connection between the meaning of the poem and the form it has been given. ‘Silencio’ is literally silence, it says nothing more and nothing less, but we are given silence surrounding blank space, silence which is also surrounded by more space. We are allowed to make assumptions in poetry and so we make our leaps and twirls, deciding that truth of silence isn’t the poem’s text, it isn’t in the text of the world – instead it is in the unseen, the squares of empty space. I believe that we could say there is something much more emphatic in the form of visual poetry which outstrips the attempts of prose to make the same comment. While prose has the gift of narrative and such structures which may also be formatted visually, aesthetically, it doesn’t have the immediate impact which poems like ‘Silencio’ and the following ‘Easter Wings’ by George Herbert give. 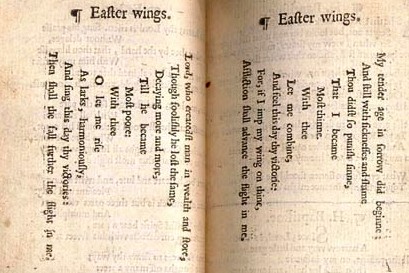 Why do we write visual poems? Because they are beautiful, certainly, but they also bring another level to the poem being written. Herbert uses the form of his poem – purposely placed on the side across two pages to evoke the image of bird wings – to give a further dimension to the depth of his writing. The poet is constantly looking for ways to give more to the reader, and visual poetry is an excellent way to do that. It comments not only on the content of the piece but also the author and reader in kind, by assuming a level of understanding which ties creator and responder together.

I would love to know if anyone had written some visual poetry (please show us!) and if anyone has a favourite poem. You see two of my favourites here, but I’ll admit that I haven’t quite managed the hang of writing them! I’ll work on some this week if you will.