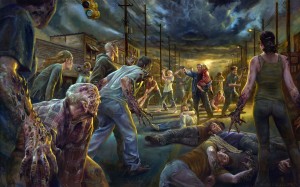 The morning round-up is a daily collection (posted M-F) of must-read links for writers. Regular readers will learn the secret to eternal youth.

I am hyped about Pacific Rim.

It’s not just because it’s a giant monster (aka kaiju) movie.

It’s not because it’s an original story, not based on any established property.

And it’s not just because it’s a giant monster (aka kaiju) movie.  (Yes, I mentioned that twice because it is worth mentioning twice.)

Read more at A. Lee Martinez

Are Typos The “Bugs” Of Written Language?

Historically, the term typo refers to mistakes in manual type-setting. And yet, even before the printing press, the typo was well known in the form of the “copyist’s mistake” or “scribal error”. As Wikipedia notes: “the term includes errors due to mechanical failure or slips of the hand or finger but excludes errors of ignorance, such as spelling errors.”

Read more at Learn Out Live

The law empowers the Bibliothèque Nationale de France to create an online database of works published in France before 2001 that are currently out of print (this includes not just works by French writers, but foreign works translated into French). Once a work has been listed in the database for more than six months, the right to digitize it transfers to a collective management organization, which thereafter has near-unlimited power to exploit that right–including granting it to publishers without the author’s permission. The collective management organization will also be responsible for distributing (an unspecified portion of) the proceeds from such grants to rightsholders.