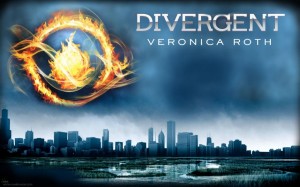 After a strenuous battle of the ages with little remorse and even less mercy, I (Skins) was the chosen one. There was catastrophic death, endless heartache, and a war so bloodthirsty that the mere mention of it makes the vulnerable collapse in fear. But finally. After all the death and battle, I have been chosen to read and discuss Divergent by Veronica Roth as part of the 10 Books of Summer. *

“Human beings as a whole cannot be good for long before the bad creeps back in and poisons us again.”

Set in dystopian Chicago, you may not think this novel has much in common with our lives today, but you’d be surprised. I think we could all agree that certain parts of our personalities overwhelm other parts of us, right? We’re all brave, selfless, intelligent, honest, and peaceful in one way or another, but some of us are braver than we are honest. Some of us are more intelligent than we are selfless, and some of us more peaceful than we are brave.

In a sense, that’s exactly what Divergent is about. It’s about how these aspects of our personalities control us, and how we can sometimes be so set in our ways that we become blind to the reality of our world. We’re too scared to even try and change, and so we just stick to the same routine, day in, day out. Beatrice (Tris) Prior, on the other hand, isn’t afraid to make that one choice that will change her life forever.

Beatrice has been brought up in a faction where selfishness is all that truly matters, and when an opportunity arises for her to leave that way of life, she must think of herself for once. She must be selfish. What she doesn’t know is that this one choice she is about to make will have an explosive impact on her life, and lead her somewhere she could never have imagined going. The question is, will she be better off after this change, or will her decision to break normality tear her life apart? And what will happen to those she loves as a result of her choice?

If you haven’t read this novel already, I’d strongly suggest you run to your nearest bookstore right now. I don’t care if you’re busy watching The Jerry Springer Show, if you’re practicing the downfaced dog at your yoga class, or if you’re feeding your cat. I don’t care if you’re in the shower, run naked if you have to. Go and buy this book because it’s a pretty awesome read. (Or you can just, like, order it on amazon. It’s available on Kindle, which is awesome.) It’s also the first part of a trilogy, and there’s a movie based on it coming out soon, yay movies.

You won’t regret buying this book, and if you do, you have permission to flush me down a toilet. I look forward to discussing it with y’all!

*(There wasn’t really a war, I just volunteered to do this.)
**(Please don’t question my use of the word ‘dramaticness’. Your spell checker is wrong. I say it’s a real word which makes it a real word, okay.)