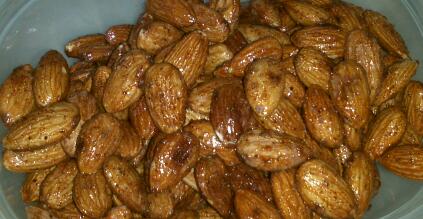 Like any other organ in your body, your brain needs food! Just as you shouldn’t exercise without at least eating something like a banana first, it’s generally a good idea to snack on something either before you start writing or even while you write. So with that in mind, here are some tasty nutritional snacks to get your brain into the right gear!

Really simple to make, and very tasty to boot! Take an apple and cut it into bite sized chunks (leave the skin on!). Then put those chunks into a container and sprinkle them with cinnamon sugar (I usually use about a tablespoon, but sprinkle to your liking). Cover the container up, shake it around, and presto!

How can you go wrong with Nutella? Spread it on any cracker of your choice (I usually go for plain bread crackers), and then just put a few banana slices on top. Alternatively, you can switch up the Nutella with peanut butter instead.

This works great as a “while you write” snack because it won’t get your fingers messy. Take a plain bagel, cut it in half, and toast it. Then spread cream cheese on top followed by sliced strawberries.

High in protein, almonds are the ultimate brain food. You can buy honey glazed almonds at the store, or make them yourself. First, mix together a couple tablespoons of honey with a tablespoon of sugar and a quarter teaspoon of salt. Then roast two cups almonds on a skillet over medium heat until they’re lightly toasted (usually takes me about 6 to 8 minutes).

Once the almonds are lightly toasted, place the mixture you made earlier in the microwave for 30 seconds to heat it up. Then pour it into the skillet with the almonds and stir frequently for a couple of minutes. After you’re done, lay the almonds out on a baking sheet (I usually use waxed paper, but aluminum foil works fine in a pinch) for ten minutes. Enjoy!

Does it take longer than the other snacks, and is it easier to just buy honey glazed almonds at the store? Definitely. But warm, handmade honey glazed stores beats the store variety any day, and it’s by far the best brain food on this list.

The best thing about these snacks is not only are they tasty, but you’ll have more energy too!