Have You Seen This?: Hemingway App

Okay, so I might be a little late to the party with this one. I’ve seen it circulating amongst my writer circles for a month or so now and I was always pretty skeptical. I mean, yeah, Hemingway is one of the great writers but do I really want to write like he did? Not particularly. And from what I understood, this was just a program that would judge how “Hemingway” your prose is.

But then I decided to sit down and take a closer look, and man is this thing cool.

The Hemingway App does a few pretty interesting things. As a basic editing tool it calls out adverbs, words that could be replaced with simpler synonyms, and instances of passive voice which can both make your writing clunky and unclear when used improperly. It will also locate “hard to read” and “very hard to read” sentences, presumably based on how long they are and how many rules of punctuation you’ve broken to get them that way. Finally, the app will tell you what reading level your work is at (the lowest education level required to understand your text), determined by the complexity of word choice and sentence structure.

Just for fun, I plugged in the first chapter of my novel-in-progress to see what came out. 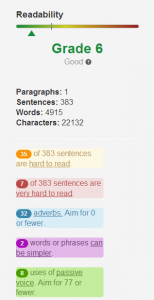 I scored a grade 6 readability which is great since young adults are my intended audience and this fully encompasses the ages I aim to write for. Anything below grade 10 readability is considered “bold and clear” writing. It then gives me a break down of my text in paragraphs, sentences, words, and characters (don’t worry, I have more than one paragraph, it just copied into the app weird). I have quite a few difficult to read sentences, which doesn’t surprise me as I know this is a problem I have in my prose. I also use a lot of adverbs, and struggle with passive voice (though I only had 8 instances of passive voice, which is encouraging since I’ve been working on that one).

I also had two instances of words that could be simpler. One was the word “very” which it suggested omitting (though in context I think it works just fine), and the other was the word “however” though the app was interpreting it in a different context than it was used so it would have made no sense to change to their suggestion. This is the only major issue I found with the usability of the app, though.

In the end, I wouldn’t use Hemingway to determine whether my prose is “good” or not. There are a lot of times I use things like passive voice, adverbs, or complex sentences to serve a point. And considering even Hemingway doesn’t pass the Hemingway test, none of us should feel bad if we don’t either. Still I think I will use Hemingway in my writing life to pick out my use of passive voice (when it’s me being a bad writer rather than me making a stylistic choice) as well as sentences that are hard to read.

What do you think? Is this something you might consider incorporating into your writing life? Are these ideals that writers should be striving for in their writing? Let us know in the comments!