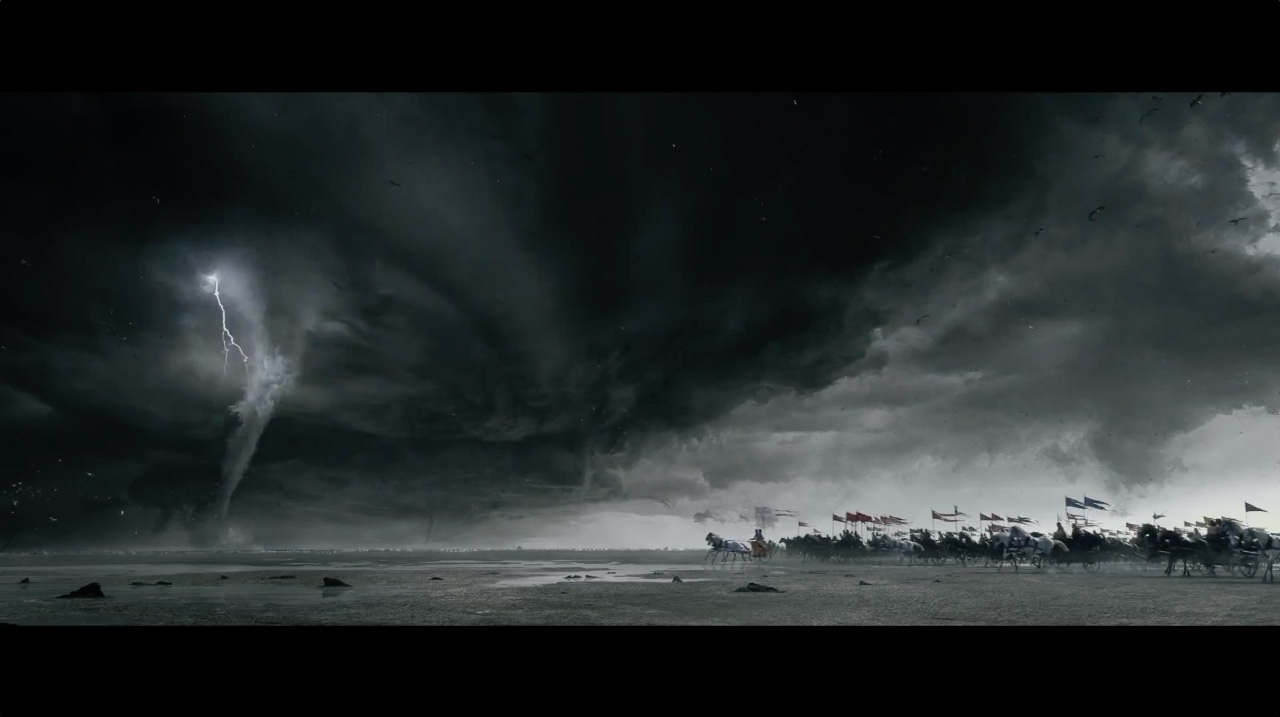 That’s pretty much how one would describe Ridley Scott’s epic retelling of one of the Bible most well-known and beloved stories.

And you wouldn’t be wrong in saying that. I’m sure Sir Ridley Scott would love hearing this, but in this day and age, Ridley Scott is the David Lean of cinema. There really are no other directors out there making epics like these.

Very well known, the story centers on Moses, and how he lead the Hebrews from Egypt.

The story of the Exodus is a story that’s been told many times. Whether it be on the big screen, the silver screen or in writing. There’s been a heap of adaptions, and one might question why there’s a need for another one. However, looking back on it, there’s actually quite a while since it’s been retold. Especially the major ones, which are the adaptions most people know about, and what I compared this to as I viewed it. That is Cecil B. Demille’s 1956 classic ‘The Ten Commandments’ and the animated film ‘The Prince of Egypt’ from 1998.

When there are already adaptions like this out there, then this film definitely has some big shoes to fill. And it does, but to varied results.

Sir Ridley Scott is one of the most accomplished and celebrated film directors in the industry. As someone who is well known for beautiful cinematography, vast settings and epic scenery, Scott seems perfect for this project. It’s his third outing within the epic film genre, after he reinvigorated it with ‘Gladiator’ and followed it up with another masterpiece in ‘Kingdom of Heaven’.

And despite how he masterfully handles a lot of elements within Exodus, there are still a lot of issues with it. One of my chief problems with it would be Scott’s approach to this from an atheist standpoint. He should be commended for managing to craft a film which goes beyond the story and tries to portray it as something realistic, but I honestly didn’t think it added much to the film.

On the contrary, there are a lot of missed opportunities. Especially considering Scott’s grand visual effects.

There are generally three major elements to the story which should be the grand tentpoles within this film: the burning bush, the plagues, as well as the parting of the red sea. All of them have the perfect set-up for cinematic beauty.

In my personal opinion, Cecil. B. Demille’s classic ‘The Ten Commandments’ doesn’t hold up anymore within any of these cinematic moments. Its special effects are, understandably, outdated. Its acting will also feel outdated, veering close to sounding like a soap opera at times, yet still strong enough to be commended. Especially Charlton Heston’s stout performance as Moses stands out.

Exodus doesn’t deliver on all of these events in a satisfying way. And it all comes down to Scott’s atheist approach.

Whereas these other adaptions depict the parting of the Red Sea in a spectacular fashion; the will and power of God, Exodus depicts it otherwise; as that of a natural disaster or phenomenon. There is no big epic moment where Moses slams his staff to the shore and parts the ocean. A huge cinematic moment is thrown away, in this effort to make the adaption realistic.

The depiction of these other great events are noteworthy though. The ten plagues are all portrayed excellently. Never before have they looked better on the big screen. And it doesn’t shy away from the killing of the newborns either, which is good. And to be honest, the depiction of the killing of the newborn is fantastic. It’s clever, horrific, and yet not as horrible as one would think.

This brings us to the final event: the burning bush. The ’98 Prince of Egypt has an amazing depiction of the burning bush. Moses’ encounter is both warm and otherworldly, and harsh and loving. In Exodus however, while we do see the burning bush, the encounter is depicted in stead through a small child. Moses doesn’t speak directly to God through the bush, but rather to this child; a messenger. I was on the fence about this before I saw it, but I’ll admit; it worked very well.

This use of this child messenger is also worked into the film to be a believable, realistic narrative, as the director purposefully gives us scenes of Joshua spying on Moses, who is apparently talking to himself. In other words, these words of God could just as well be in his head, and the only thing setting the Exodus into action was one man, trying to right wrongs. It’s an idea I rather like.

Most of the actors perform their parts well. Christian Bale performs well as a stronger, more warrior-like Moses, who is changed by the quiet farmer life he finds with his wife, as well as (of course) his encounter with God, and the challenge which lies ahead of him. Joel Edgerton does well as Ramses; fairly similar to other versions of Ramses before him.

Aaron Paul does well as Moses’ right hand man Joshua (ironically getting more of a spotlight than Moses’ other hand Aaron, who was his brother). In the beginning he actually felt rather out of place for me, but he soon grew on me, maybe because he grew into that beard. Which he rocked.

In addition to these, there were a lot of other good actors that seemed perfectly wasted in this picture. Sigourney Weaver barely gets a line, and Ben Kingsley is also lacking stuff to do. Ben Mendelsohn does fairly well with his small part. And of course, Isaac Andrews does terrific as God’s Messenger.

Lastly, if you’ve heard any mention of this film before, then you’ve surely heard about its apparent ‘white-washing’. There are several roles in this film that should have looked Egyptian, but ended up being played by white actors. Frankly, I don’t really care about any of that. As long as the completed film is good, I don’t mind too much. Maybe I should, but I don’t. Hopefully you won’t either.

Nobody in this film really pulled me out of it, except for one person: Ewen Bremner. Aka ‘Spud’ from Trainspotting. This actually annoyed me. If you’re going to cast the role of an Egyptian medicine man, then please don’t cast goofy, bumbling, very Scottish, Ewen Bremner for the part. He’s going to stand out.

The soundtrack is composed by Alberto Iglesias, with a few selected track pieces by Scott’s regular contributor Harry Gregson Williams, as well as Federico Jusid. The score is good. Iglesias composes a lot of good Middle Eastern music, while Williams brings an epic sound to the film, and Jusid provides the quiet spiritual moments.

Ridley Scott has gone on record to say that he has a four hour version of Exodus in store. I only hope they’ll someday release it, as it does have issues that could be resolved in it. Particularly within the characters. All the supporting characters could use some more character to them, and despite how the film focuses so much on Moses and Ramses, they could use some more development themselves. Especially Ramses.

Exodus: Gods and Kings, (which is the subtitle they had to give after not being able to secure the rights to the name ‘Exodus’) is a finely directed film, which has a lot of lacking elements in it due to unclear writing. There are characters that are wasted, despite the running time, and then there’s this big feeling of there being a lot of opportunities that are wasted as Scott made this from an atheist point of view. Which is fine. And he should be applauded for doing it so effortlessly.

Yet, in the end, we see films to be entertained. This story, unaltered, would have made for fine entertainment. Not that Exodus isn’t. But it feels rather…wasted.

As the final frame of the film fades to black, the words ‘For my brother, Tony Scott’ are displayed on the screen. Taking into account the heavy focus on the ‘brother’ aspect of the film, this is a very fitting, and touching tribute to Scott’s late younger brother.

Exodus: Gods and Kings is available on dvd and Blu-Ray on April 20th in Europe, and March 17th in the US.

Christian is a Norwegian cinephile. Moreover, he's a writer, a geek, a lover, and a complete doofus at times.