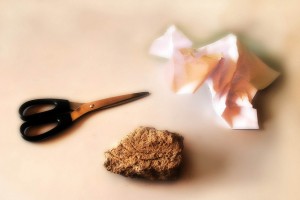 As writers, sometimes we find ourselves between a rock and a hard place. Whether this rock is a lack of inspiration, or a plot arc which refuses to be resolved, we often meet them before we finish writing. I want to banish this idea that you shouldn’t edit until after you’ve finished your first draft. I want to tell you that it’s okay to take a break and to really look at your writing because sometimes a lot of wasted effort can be saved from early refinement.

If you’re still with me this far, then we’re doing well. So. We’ve got our rock and if you’ve played the well known game of rock, paper, scissors, then you know the way to defeat the rock is with the paper. Except it isn’t, because no matter how much paper you wrap around that rock, it’s still a rock and you’re going to need the scissors.

The paper obviously represents your continued writing, through the inspiration block, or through the plot arc which doesn’t want to bend to your whim. You write and you write and you don’t worry too much about writing because it’s words on paper and oh look, I’m writing! But this approach can only take you so far. Somewhere along the path, you will have to stop and look back down the winding whorls of writing to your rock, where you will come to the conclusion that you need a great big pair of scissors to cut that rock free.

Now that I’ve got you all convinced and excited (I wish!) I am going to talk about how we go about making those cuts. This can be scary because it has a big effect on your novel and it can flag up a lot of sections which might need to be written again, but it can also cut away those rocks and brambles that somehow get strewn across our paths and make it impossible to see the end.

Where do I Begin?

Start by asking yourself what your rock is – what is keeping you from writing and what is keeping these pieces of your novel from fitting together? The answer might not be obvious at first. You might think, ‘Well I just haven’t got an ending’ or ‘I’ve run out of ideas’. But you need to dig deeper than that and examine the different areas of your novel until you find the problem parts.

Characters: Are you having trouble keeping track of all of your characters? Or making them interact with each other? If you said yes to either of these, it might be that you need to re-evaluate a character’s desires or cut one altogether. If you have a lot of characters (more than eight key figures, including main and support), see if two of them are similar enough to be fulfilled by a single entity. If you can’t get your characters to interact together, make a list of their desires and see how they can help or hinder each other in accomplishing these.

Plots: There’s a lot to a plot and we all want to be a master storyteller, weaving end over end into a master tapestry. But it isn’t easy and you need to ask yourself: do I have more plots than I can tie off? If you’re always introducing new conflict and never resolving anything, you need to make some cut backs. I wouldn’t advise having more than five or six open strands at a time and there should always be at least two or three of those in the progress of being resolved. What constitutes a strand is harder to define, but it might be a fear your character has (that’s a background strand; something which will likely span the full novel) or it might be a conflict with an ally (that’s a foreground strand; something to resolve in a couple of chapters). A balance of background and foreground strands will help you keep on top of your weaving.

Locations: Many novels rely on set locations they return to as the plot unfolds. This helps the reader to feel comfortable and connected to the scenes and as the plot advances, they will come to know the locations well enough that they can focus on the plot instead of the descriptions, and you will find that reinstating a description takes less effort than the initial establishment. Take a look through your novel and ask yourself if there are any scenes where the action could be taken back to an earlier location or one which you later plan to introduce. Think about your favourite novel; how many locations can you name and how many times was each of these re-visited? As a reader we most easily remember and grow fond of the places we visit time and time again, such as Diagon Alley from the Harry Potter franchise or the rope swing in Bridge to Terabithia. A location can be as big as Hogwarts or as small as the wardrobe to Narnia, but if you take the time to explore it, your readers will never forget.

Every great novelist will go through these steps. We will meet our rocks and at first we’ll soldier on and wrap them in paper, but sooner or later we know we’ve got to take the scissors down from the shelf and cut ourselves free.

Good luck with your rocks, everyone! Why not talk about yours below – I will be happy to give advice on any blockages you’ve come up against! Or if you would like to see me cover something in greater depth in a future article, please feel free to make a request.