The Editing Cycle #4 – The Domino Effect 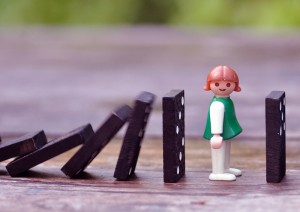 Don’t be caught unaware by the domino effect!

Editing can sometimes be a painful experience and one of the reasons for this is the domino effect. If you’re keeping up, then you know that last week we looked at character growth and the importance of balancing change with consistency, but what we didn’t look at was the effect that can have on your novel as a whole. That’s what this week is all about.

To give you an introduction to what the domino effect is, we’re going to do a brief exercise, so have your writing utensils at the ready!

She hadn’t been looking for a fight, but one had found her. The sky troll was enormous, five times the size of Nebula, and his sky-void eyes could swallow her fist and still be hungry. But Nebula knew, as she stared up at the stocky, armoured creature, she knew this was it. It was her day to take down a sky troll.

After which, of course, Nebula goes on to defeat the big, scary troll.

Now we’re going to play a game of cause and effect: because your character has overcome their difficult situation, this leads them to making realisations about themselves and it affects the decisions they make in the future. For example, Nebula goes back to her village and she tells her father that she took down a troll, just like him, but after a frantic and angry confrontation, it is revealed that her hero of a dad never took down a sky troll afterall. This leads to a major re-shaping of Nebula’s world view and how she feels toward her father.

What about your character? What happens as a result of this victory? You can break this down into physical and mental changes:

Physical: Nebula talks to her father and discovers he has been lying to the village for years. She feels their relationship is ruined and leaves her father’s house to find a new path for herself. This path is harder than she expected and Nebula is forced to lie on multiple occasions, until eventually she rediscovers her respect for her father.

Mental: Nebula’s confidence is boosted and she is entirely convinced of her skills and righteousness from defeating the troll. This leads her to be proud and over-confident.

A week later, we have finished the story and we’re feeling awesome about it, so we decide to go back to the beginning and edit some of those rough, early scenes. Then we start making changes, very small at first, but those changes have ripple effects into later scenes: adjustments in the character’s mood, health or circumstance. Until we realise that come the battle with the troll [insert your situation here] our character is too depressed and too crippled to take on such a difficult problem and instead turns around and runs.

Take a deep breath and I’ll tell you a few home-grown truths.

There aren’t many short cuts to editing and it takes time if you want to do it right. Even an in-depth reading of your novel can consume weeks, then there’s the dialogue to tweak, the character arcs to fix, the plot arcs to plait together into a perfect tapestry. This isn’t something you can do in one concentrated sitting. Instead, it’s easier if you break it into rounds.

At the beginning of each round, choose a focus. This could be plot, characters, dialogue, description etc. Choose a single element of the novel to work on and start working through. If you come across a small issue, something which is confined to the scene or only has a minor effect on other elements, fix it! Don’t put off what’s easy to fix now. If you come across a bigger issue, highlight it, but before you make any changes, work out what the domino effect will be and prepare yourself.

You may discover two changes which will cancel each other out – a change which requires you to move off plot, and a later change which grants the opportunity to get back on track. If you can identify these both at the initial read through, it gives you a focus point to work toward and instead of feeling like a re-write, this will be more akin to filling in the gaps.

Remember, when editing always move from start to finish!

While ever you’ve got pages left to fill, there’s still time to write a plan and this can help you avoid the domino effect. The more thoroughly you plot out your novel, the easier it will be to discover and resolve any hidden plot holes, before you fall into them.

One form of planning is the cause and effect chart, which can also be interpreted as actions and consequences. When these are considered in relation to character desire, it is possible to mark out the path between each situation which could cause a domino effect, each ‘domino’ if you will.

Your character’s desire in the first chapter might be to do something exciting and then an outside action occurs: the circus has come to town. The consequence of these combined elements is that the character decides to go to the circus.

Here’s an example of a basic Character desire plan for the first scene:

Actions: Circus has come to town. There is a new boy at school.

Consequences: Character 1 persuades characters 2 and 3 to go to the circus with her, thus fulfilling all of their desires.

Most of us don’t know exactly where our novels are going when we start out writing, so sooner or later, we’re bound to be hit by the domino effect. By being aware that it’s out there, sometimes we can catch it early, or at least prevent ourselves from needless work by editing from start to finish and focusing on the key elements of character and plot. The more minor elements, such as description and grammar, can be fixed when you’ve decided which scenes are for keeping and which belong on the scrap heap. There’s nothing more infuriating than getting a sentence perfect and then realising you don’t need that scene.

If your novel is still a work-in-progress, you can set safe guards against the domino effect as you write: when you complete a scene, check it over and ask yourself a sequence of questions. Do all your characters follow their desire paths? If not, is there a reasonable explanation? Does your plot follow all the current lore of your novel? Have you made a plot breakthrough since starting this chapter? If so, is there anything you need to amend in an earlier chapter?

Above all, remember to look at an impending domino effect with a neutral view-point. If a scene needs to be fixed, then fix it! Don’t let the bill of damage frighten you into not making your novel the best it can be. We might have to build our lego houses more than once, but ask any child and they’ll tell you, that’s how you get the windows in the right places.

Have you ever experienced the domino effect and if so, how did you approach it?