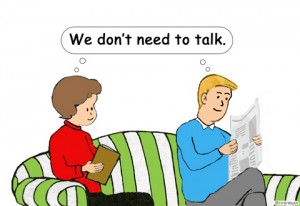 There’s a lot to be said about dialogue. Perhaps a year, or ten from now, a revolutionary author will come along and present us with a book that has no spoken word, no vernacular tone and no narrative speaker. Perhaps it has already been done, but do you know why you haven’t heard of one; don’t have one sitting on your own bookshelf? It is voice which drives the characters and characters which drive the novel, otherwise we’d all be happy reading ‘Landscape for the mind’.

It might even be calming for a chapter or two, to have the scenes described to us in such exquisite detail that we feel ourselves there, feel the bridge creaking under our feet or the lantern penetrating the gloom. But, how long can you go without the sound of another human soul being; belonging; breaking. As much as we can feel connected to a scene and it might trigger a memory or emotion within us, the connections we form with characters are on another level entirely: we befriend them. We love or hate them and through their dialogue, we watch them struggle against the hardships of their path and fail or succeed.

This week’s exercise is one to take away with you. When you have some spare time and you’re looking at your novel, I want you to select between five and ten lines of dialogue, each line with a minimum of ten words. Try to get a good selection from different parts of your novel and copy and paste them into an empty word file. Then, take away the dialogue tags. Take out anything that isn’t dialogue and do this quickly – don’t agonise over your choices. Grab a line, remove the dialogue tag and move on.

Save that file and find something else to do for half an hour, maybe even leave it sitting there for the day, but when you come back to it, I want you to write next to each of your lines who is speaking. If you find you’re having trouble, it might be that your characters’ voices aren’t distinct enough.

Another option, if you feel you are too familiar with your own writing, is to ask a friend or relative to pair up the lines. For this option, aim to choose two or three lines from three or four different speakers and ask your helpful volunteer if they can first separate them into the individual speakers and secondly distinguish whether each voice is male or female and a ball point figure for their age.

Below, I’ve selected five lines of dialogue for us to look at, all belonging to a single character. What I want you to consider is what distinguishes this voice from others? What consistencies are there in each line of dialogue? Watch for the repetition and the similarities of syntax, how most of the time I open with a ‘summarising’ sentence and then an explanation follows and, more often than not, the first sentence gets reiterated to drive her point home. These are all characteristics of the way Laura speaks:

“Their dad’s not here y’know. You don’t gotta be worried about him as he’s not here.”

“Well then, rent it again. Kate said it was dead romantic when her and Danny watched it and she doesn’t normally like that type of thing, so it must really be good.”

“That is so sexist, it isn’t just girls who are secretaries you know and I certainly didn’t agree to be yours and you really don’t know how to set up a display.”

“Toby… I’ve given you enough time haven’t I? Don’t you think I’ve been fair? Only… only. Only it’s time we started dating again.”

We don’t all the same talk

Everyone has a different voice and one of the best pieces of advice I can give to any of you is to stalk. Yes, you heard me, go stalk someone! Whether it’s a friend or a stranger, get sat behind someone with an interesting voice and write down any phrases you find interesting or unusual. If you’ve got an hour to kill, find a cosy seat in a cafe and eavesdrop on a conversation, or if you regularly take public transport, use that as an opportunity to hear a voice you wouldn’t normally encounter. If you’re young, why not seek out someone older? If you’re softly spoken or very sparing with your words, then suck it up and listen to someone ramble about their neighbour’s dog for an hour.

That’s step one of how to research dialogue and step two is what I like to call ‘getting technical’. Everyone has their own vocabulary well, from which they create their sentences. You’ll get people sharing common words like ‘together’ or ‘always’. After that, it’s time to get technical.

What are the influences on your character’s vocabulary? I have a tendency to think in mathematical terms, and I love words like ‘equate’ or ‘calculate’ – where I would say, ‘can you calculate the difference?’ another person might instead ask, ‘but what’s the difference?’

It’s a classic case of what does this ink blot look like to you? Maybe you see a dancer, while your friend sees a butterfly, and there will of course always be that one guy who says ‘I see an ink blot’. Get to know your character by researching the language associated with their favourite activities – you may find an artist using words like ‘render’ or ‘overlay’ in every day speech. Or if your character has a background in business, do they use phrases like: ‘What value is that going to add?’ ‘Are we able to integrate the two?’

These segues into industry jargon may be subtle or loud, depending on your character’s personality. At the minimum, when they’re talking about their interests, they need to use the right language; I don’t want to hear any writer saying ‘but the people in the book are really dull’ when what they mean is characters. At the highest level, even when they’re making a casual observation about the weather, they’ll reveal elements of their personality: “Nasty weather we’re having.” “Yes, the rain’s a permanent fixture.”

People don’t always get to say what they

A mistake I see a lot in dialogue is every sentence complete, every idea expressed to its fullest capacity. That doesn’t happen. Conversations tail off, or people get interrupted before they get to say everything they wanted and maybe they’ll have the conversation again later, but an idea when first expressed is rarely resolved. If your characters try to talk about their problems, it should take several attempts before they understand each other, or reach a resolution, and this will give you the opportunity to build tension between them. Breaking conversations off early is a great way to keep your readers hooked.

Sometimes less is more and it’s natural to have gaps in conversation, either because of presumed knowledge, or because people pick up conversations where they left off. It’s more natural for someone to say, ‘Did you catch the game last night?’ than for them to specify, ‘Did you see the football game of Watford versus Liverpool at seven thirty last night?’ You shouldn’t be afraid to make your readers work hard to understand a conversation, or to make them wait a few chapters for the second instalment,

Another occurrence of unrealistic dialogue is characters who hold interesting and provocative conversations all the time. That doesn’t happen. When people talk, in reality it’s rare for a conversation to go off like clockwork, and more often than not the interesting nuggets of information are interspersed between hesitations, awkward sidetracks, repetitions and mundane comments.

It’s important to get the balance right between having exciting dialogue and allowing your characters to be ‘real’ and thus a character we can engage with. A good author uses subjects which come up in every day conversation: the weather, how are the kids doing? What did you get up to at the weekend? By establishing these daily habits, the reader  is able to feel connected with the characters and, however fantastical the events might get, they’re going to have some grounding in reality. A reader is more readily able to believe in a future where people live on spaceships, if the characters are arguing over the best way to cook an egg.

What techniques do you use when writing dialogue? Do you find it easier to concentrate on one voice at a time, or do you find comparing character voices a good writing aid? Does music help you get into the right mood for a particular character?