The Six: Six Things You Didn’t Know About Charles Dickens 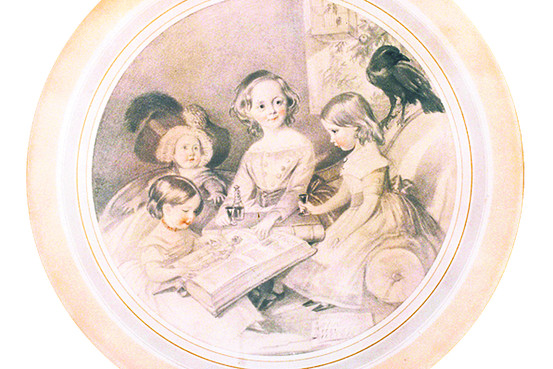 1. His immortal pet raven inspired the famous Nevermore-speaker of Poe.

Dickens had a pet raven named Grip. That alone might be interesting. Imagine growing up in a household with a nice, big, super intelligent bird. But the curiosity surrounding Grip doesn’t stop there.

He was a beloved family pet. He was featured in family portraits that Dickens and his wife commissioned when they went on long trips. He learned to speak, his last words were lovingly recorded, and after his death Dickens had Grip stuffed and mounted.  And thus, Grip took his first step to being immortal. The next step toward immortality occurred when Dickens gave the town idiot and title character of his 1841 serial Barnaby Rudge a pet raven with a very familiar name. Barnaby Rudge wandered in and out of the story with a pet raven named Grip. Hard to forget something that’s been published.

What was that? Him tapping at the door?’

‘No,’ returned the widow. ‘It was in the street, I think. Hark!  Yes. There again! ’Tis some one knocking softly at the shutter. Who can it be!’

Doesn’t that sound a little bit familiar? One of the reviewers of Barnaby Rudge happened to be one yet-disliked Edgar Allen Poe, who noted that he was displeased with the way several aspects of the tale had been woven. Here is some particularly striking text from his review:

And there you have it. In a lucky case of “This was almost good, but I can do better” that many writers are bound to encounter through the course of their lives, Poe took the raven, wrote his own version, and hit on the very piece that would lift him to fame. So you may not have known that you were acquainted with Grip, but you most likely have been delighted by the immortal presence of this beloved pet of Charles Dickens.

Grip now rests, surrounded by a collection of Poe’s works, in a library collection in Philadelphia.

2. He nicknamed one of his children after a candy that hadn’t been invented yet.

Charles Dickens liked giving peppy nicknames to, well, everyone. He crowned himself “Boz”, and bestowed an equally entertaining nickname on each of his nine children. There were: Charley, Mamie, Lucifer Box, Young Skull, Chickenstalker, The Ocean Spectre, Mr. H, Plorn, and Skittles.

Alfred D’Orsay Tennyson Dickens lived from 1845 – 1912, and while those of us who grew up with the shiny red bags of candy might be more tantalized by a boy named after (before?) Skittles, Dickens’ contemporaries were more concerned with who Dickens has chose as the boy’s namesakes and godfathers: Lord Tennyson, a poet laureate of Great Britain, and Alfred D’Orsay, an aristocrat. There was some speculation that Dickens named his children after more famous figures as a form of boot-licking.

Now, there’s no evidence that the candy’s name is related to Alfred’s nickname at all, but Skittles were invented in Britain around 1974 . Just sayin’.

When Dickens World first opened, it was hailed as an exciting experience of a lovingly-recreated Victorian London. There were rides based around the plots and themes of Dickens’ works. Especially celebrated was the Great Expectations boat ride/log flume. Other attractions of this Chatham attraction included Europe’s longest indoor dark ride and a haunted house celebrating Mr. Scrooge. Everything in the park is dedicated to the world that Dickens created through his writing.

Sadly, due to the economy, it seems 2013 has taken on a completely different direction. The park is no longer open to wandering enthusiasts as an amusement park, but instead conducts a structured and educational Grand Tour. According to the website,

“[f]eedback and research told [them] that customers wanted more for their money, they wanted more information about Charles Dickens and about the Victorian/Dickensian ways of life. [Dickens World] therefore decided that a guided tour conducted by professional actors would offer the educational yet funny and interactive experience that [their] customers are looking for.”

Oh, well. At least some of Dickens’ other legacies are slightly more successful:

4. He has a couple of notable actor descendants, both also descended from Mr. H.

Mr. H, Henry Fielding Dickens, was Charles Dickens’ eighth child, and is considered the most successful of all his children. Henry grew up to be a lawyer, who began his success with receiving a scholarship from Trinity Hall. He received the title of Knight Bachelor in 1922 and was the last surviving child of Charles. But beyond his lifetime is where a little more interest lies.

Perhaps a bit more interesting to those of you who prefer television to stage acting, Charles Dickens’ great-great-great-grandson is Harry Lloyd, known for playing Viserys Targaryen in Game of Thrones (but still brought it full circle by playing Young Steerforth in the 1999 TV movie of David Copperfield).

5. He thought sending prostitutes to other countries would help them live better lives.

As is clear from any number of Dickens’ books, times were hard. For many women in Victorian England, this meant that prostitution was a viable alternative to going without food. As is the case today, prostitutes were viewed from a variety of perspectives, but were often thought of as fallen women. Dickens expressed his tacit views on religion through action rather than proclamation, so when a friend brought the idea of Urania Cottage to his attention, after some hesitation he threw himself whole-heartedly into the project.

Urania Cottage was slightly different than other homes of the time. It had some of the usual features: attempts to rebuild the attitudes of the admitted women, to teach them domestic skills and make them once again presentable in society. But under Dickens’ direction, the home treated the women with more sympathy. Rather than a harsh, unforgiving environment intended to rectify their wrongs, admittance to Urania Cottage began with a personal interview given by Dickens, where the woman could describe her entire life until that point, tell of all her difficulties with honesty. Once admitted, Urania Cottage taught the women skills like crafts and baking bread for a year, after which they would hopefully emigrate to one of the English colonies for marriage.

Records show that of the first fifty-four participants, twenty-six successfully went through with the program, finding new lives in Australia. In a crueler twist, Dickens also sent his wife away

The first copyright law passed in America gave protection for new books for a period of fourteen years. Encouraged and brought to fruition by Noah Webster (yup, the dictionary one), this law only protected works by American citizens. This meant that America made no effort to protect international works and other countries had regulations for protecting literary works by Americans. But obviously, some people weren’t too happy that their works were being pirated and sold in America with no profit to them. Dickens was one of these unhappy authors.

The first law seemed acceptable from when it was passed in 1790 up until around 1830, when the movement for a copyright treaty between America and England began to develop. During this period, Charles Dickens made personal attempts to impress the merits of international copyrights in America. It was in fact the purpose of his first voyage to America in 1842. Later visits revolved around the prospect of making money not from printed books but from readings given by the author. These visits were more successful than his attempt to help change the copyright law, which did not result in any protection for international authors until nearly a century later.