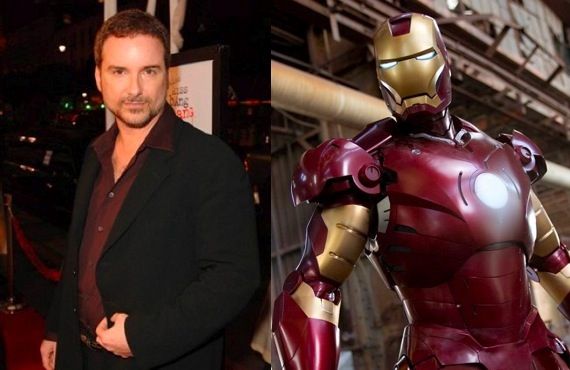 Can you tell which one is Shane Black?

Iron Man 3 opened world-wide last weekend to universal acclaim; it earned $198.4 million in its opening weekend alone! For us in the United States, we still have a few days before it opens in theaters here, but expect it to smash box-office records.

What’s the reason for the success? The hype surronding the Iron Man trilogy, as well as the huge performance of The Avengers last year, is part of it. But another part of it is that it’s actually supposed to be, you know, good. Remember Spiderman 3 – another eagerly anticipated end to a superhero trilogy? Yeah, I wish I didn’t remember it either.

The man responsible for this is the director and co-writer of Iron Man 3, Shane Black. If you’re interested at all in becoming a published writer, you could probably learn from him because during the 1990s, he was Hollywood’s highest paid script-writer.

He sold his first screenplay, Lethal Weapon, for $250,000 in 1987. He would later receive $1.75 million for his screenplay, The Last Boy Scout, and $1 million for Last Action Hero. This was all topped with his screenplay for the 1996 film The Long Kiss Goodnight, for which he was paid $4 million! That’s still a record to this day in Hollywood.

While all these films were successful (some more than others), that alone does not explain how he became Hollywood’s highest paid screenwriter. Rather, Black wrote his screenplays for the reader, peppering it with humor and small meta flourishes.

Most studio bosses never read the scripts. Instead, studios hire script readers, who can (quite understandably) become a bit bored and weary. Black recognized this and wrote his screenplays in such a manner as to make them fun to read. Take this description of an action scene in Lethal Weapon:

From The Long Kiss Goodnight:

He’d also mix in some dark humor as well:

And he also frequently broke through the fourth wall to speak directly to the reader:

In short, Shane Black made his scripts interesting and fun to read; script readers actually looked forward to reading what he wrote. He used lively adjectives while just giving the parameters of a scene so that the reader’s imagination could fill in the rest. Moreover, you get the feeling as if you’re actually talking to him when reading his scripts.

I don’t know about you, but I’m looking forward to seeing what he wrote this weekend.

Images and source article at Vulture