Rick Riordan and the Olympians 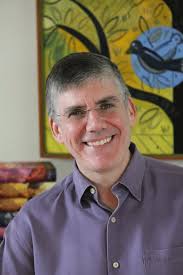 A few years ago, Greek, Roman and Egyptian mythologies were only subject areas to be studied by scholars of such interests, but recently, if you’ve noticed, even youths eight to twelve years old know who beheaded the Hydra and what does the head of Anubis look like. This is not only an effect of the advancement of school systems, oh, no no! Rather, it’s the popularity and influence of the series Camp Half-Blood, Kane Chronicles and many more, all of which are works of our Author of the Week, Rick Riordan.

Who is Rick Riordan? Well, currently, he’s an author based in San Antonio , Texas, where he is living with a wife and two sons. He had his roots there, in Texas, where he was born, was raised, graduated from Alamo Heights High School and then graduated from University of Texas at Austin. He wasn’t directly able to write a Mark Twain Award-winning children’s novel series, though. After graduation, he turned to the world of teaching, wherein he helped the young students of the Presidio High School in San Francisco learn his mastered craft in English and Social Studies.

His first series of novels wasn’t penned for children. Shocker, huh? It was actually for an adult audience. It was called Tres Navarre, which might mean ”Three Plains”. Anyways, the series targeted to surprise audiences with action-packed scenes and twisted revelations starred by a witty and quite intellectual Texan private eye. As they say, it’s better to start where you come from!

The twelve-year old demigod Whatshisname was made star by Riordan by 2005, wherein he had finally published what will begin a bomb of a novel series. The Percy Jackson and the Olympians series features a modern day retelling of Greek mythology, in which demigods, the children of both a god and a mortal, are put into the limelight. Riordan here is not only an author, but is considerably also a dream weaver, for he claimed in public that his inspiration for the series was the dreams of his sons. But of course, let’s not forget that Greek and Norse Mythology and his avid love for the Lord of the Rings series are also part of his motivation. Selling more than 20 million copies in over 35 countries, it’s no mistake that Riordan’s works attracted young and old readers alike, and so by Spring 2010, Twentieth Century Fox bought the film rights, and then created the first ever  feature film to based on the series, which carries the same title.

Due to this ultimate success, Riordan was inspired once again to continue his works in new avenues.  Thus, The Kane Chronicles, which features a modern-day Egyptian pantheon headed by a pair of sibling protagonists, was released May 4, 2010. Also, after receiving so much favorable requests from fans, Riordan just had to continue the stories of Percy Jackson, and so The Heroes of Olympus came to the world, which was started by The Lost Hero, released in the U.S. October 12, 2010. A fact that is lesser known is that he was also the one who started the mystery series, the 39 clues, in which he wrote the premiering book. As of now, Riordan is planning for a new series of novels starring figures from Norse mythology.

We can learn from our author of the week that it’s not bad to retell stories. In fact, all the stories we have nowadays are retellings of different things. Retelling of a single moment, of a special event, of an idea of another, of an inkling of precious memory. What matters more is how we write it, and how we present it to the prying eyes of the world’s readers.

This is Alf for your Author of the Week.