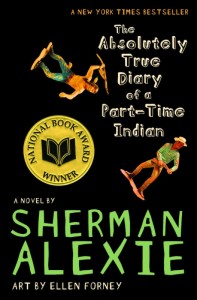 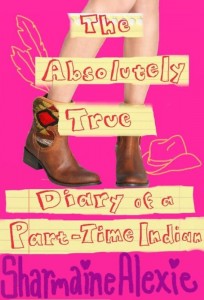 Earlier this week young adult author Maureen Johnson issued a challenge on twitter: to take an already existing book cover, flip the gender of the author, and imagine what cover art would have been given the book if the content was exactly the same.

Now, one might think, “how could the difference be so significant? Aren’t book covers designed to reflect the content of the book?”. Well, yes and no. Yes the cover art is created by marketing and graphic design professionals who know the inner workings of their industries and will create the cover they think will best market the book. Unfortunately, though, there is a huge gender bias in publishing and marketing – and in many many other areas of the world – that makes this art different when written by Sherman Alexie versus Sharmaine Alexie, as imagined above.

The average reader might not be as aware of what is actually going on with the cover art and marketing of books written by women. When a woman writes a book, there are already judgments passed on what that book is about without even reading it. Books by women are often categorized as “chick-lit” (whatever that is) or romance. A man can write a book about a teenager struggling with the hardships of growing up and it’s the great American novel. Men and women will pick that book up and read it. A woman can write a book about the same thing and it’s shallow fluff. And chances are, more women are going to read that book than men. In many cases that’s because of the associations society has built for us with the female gender and female names. In many other cases that’s because a book by a woman will (more likely than not) get a cover that is pink, features a female, contains flowers or clouds or can be in any way described as “light”, “airy”, or “flowy”, or any combination of those. Of course there are exceptions to that rule, but it seems they are unfortunately few and far between.

Perhaps this is more a flaw in the gender binaries society has constructed than it is in the publishing business, but as an aspiring lady author it’s something that I personally have to think about should I see my own books make print someday. Because I am a lady, will including romance in my novel instantly brand me as writing romance, or worse that unfathomable “chick-lit”? Will featuring a female protagonist push away male readers, even if I were to publish under a male pseudonym? Would I even feel right publishing under a male name?

Authors (at least those published by big traditional publishing companies) don’t get a whole lot of choice when it comes to their cover art. Other people will make gendering decisions about the books written by female, or male, authors and that will affect how those books are received and who reads them. Readers will listen to the social scripts inside their heads and make judgments about the content of those books based on the apparent gender of the author. Would the Harry Potter series have been so well received if they were written by Joanne Rowling? Yes, we are all aware now that JK Rowling is a woman author, but her decision to begin her authorial endeavors as JK rather than Joanne probably had a major effect on the way those books were first received. A novel by JK Rowling has the cover art we associate with the Harry Potter books today. But what would the cover of a fantasy novel by Joanne Rowling have looked like?

Perhaps it wouldn’t have been entirely different. Children’s books fall into a world of their own, where the gendering is often less significant, but my point remains the same. There must be a change in the way we view male and female authors, the things they produce, and the ways those things ought to be marketed. Unfortunately this is a problem deeply ingrained in other aspects of our culture, and will never be an easy fix. It’s not even something I can propose to know how to fix. But it is a real and present problem in our world, and perhaps someday we can find a solution.

What do you, dear reader, think about the gendering of books in the book industry? If you’re a woman, would you consider publishing under a pseudonym? Why?

Click here to read Maureen Johnson’s insightful article on gendered marketing in the book industry, and view more of the cover flips done for the #coverflip challenge.